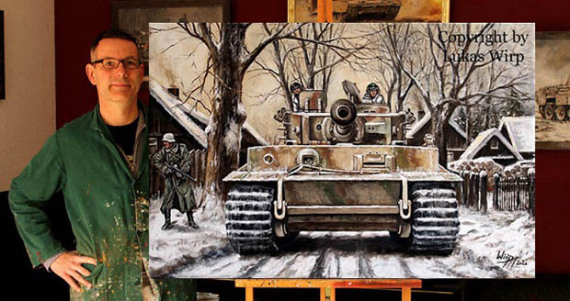 Artist Lukas Wirp with on of his original painting

Lukas Wirp is a German war art historian, as well as a professional painter. His specialty is primarily in military war art paintings. There is story behind every single one of Lukas' paintings.

Much of his work has been featured in museums, public spaces, as well as private collections.

His biography can be seen here:

By 1993, at the Hamburg Art School as a student of Erika Gloede.

September 2006: Due to numerous business publications in museums, collections and public institutions included in the furrier Künstlerlexikon of Fine Arts.

February 2007: Due to numerous international sales inclusion in the International Directory of Arts

September 1997: Admission as a lecturer in art and culture Academy Geras in Austria.

Between 1997 and 1998 courses in teaching blocks in various fields of oil technique.

August / September 1999: Senior Lecturer of the "Hamburg Summer Academy" in collaboration with Galerie unique and the art historian Holger Hansen.

In November 2001 opening his own art school in Ratzeburg / Lauenburg.

Since 2002 a number of teaching activities in the field of education and urban social services.

September 2009-February 2012: teaching activities in the field of visual arts for the Lauenburgische Gelehrtenschule and other institutions in part-time (in addition to the  work as a professional painter)

April 2015: A painting of a Russian T-55 was presented to the Sächische Military History museum.

January 2015: A portrait of the battleship Graf Spee was given to the Uruguay Navy Museum by  Captain Langsdorff`s daughter.

November 2014: Paintings Prints of a paratrooper motiv of Lukas Wirp will be presented to the Government of  Austria.

July 2014: A tank painting Panzergrenadiere the Bundeswehr Marder 1 A5 is handed over to a Bundeswehr Panergrenadierbataillion.

May 2014: The painting "Major General Spindler" is in a ceremony at the Army - passed training department Leipzig.

May 2014: The art book "The marine painter Lukas Wirp" appears in the first edition. Included are selected maritime and marine paintings.

May 2014: Another painting of tanks Leopard 2 tank A6 (summer maneuvers) will be presented to the public hanging of a German Army tank battalion.

May 2014: Transfer of Lukas Wirp Painting Art print from the European Military Parachuting Association to the Theresianische Militärakademi / Vienna.

April 2014: The art book "The military painter Lukas Wirp" appears in 4th edition on the market. There are over 50 paintings illustrations in glossy format.

February 2014: Participation as a guest performer military painter during winter maneuvers of a German Army tank battalion. Subsequent signing for a canvas painting directly on the Leopard 2 A6 by the company commander.

May 2013: signed on the occasion of the 100th anniversary of the U-boat commander Reinhard Hardegen (Knight's Cross with Oak Leaves) this March 18, a painting by Lukas Wirp from the U 123 boat up to the gates of New York

February / March 2013: Once again, a motiv that here the Marder A3 as a commemorative stamp is issued by the Special Field Post Office.

January 2013: Transfer of the painting "Marder A3" to the ordering mechanized infantry unit of the armed forces.

November 2012: A reproduction of the painting "Assault Gun III of Major Ludwig Bauer during the Battle of the Bulge" is added to the United States Military Academy "West Point".

October 2012: The Special Feldpostamt prints of the painting "Segelschulschiff Groch Fock before Laboe" a special stamp.

August 2012: The Special Feldpostamt prints of the painting "frigate Rheinland-Pfalz Helgoland" a commemorative stamp on the occasion of the Hanse Sail 2012 Design.

June 2012: lecture on the occasion of the official handover of the painting "Graf Spee before Montevideo" to the head of the then demolition squads, today 97jährigen Herbert Klemm. Et al loaded the historian Dr. Dr. May.

June 2012: The special field post office prints the painting "Leopard 2A6" as a special stamp dedicated to the soldiers days.

April 2012: The German Air Force Training command returns one of my flyers painting as a gift to the General Staff of the United States Air Force.

November 2011: The painting by SdKfz 251 of Peiper group goes into the possession of the Viennese private museum collection Zajic.

October 2011: The book "Once fill up please - Lebensnergie of charge - by Lukas Wirp" is laid out by the publishing house and goes into the public sale.

August 2011: The painting "heavy battle tank Leopard 2A6 of the German Army" is awarded to the former royal family of Württemberg, Duke Friedrich of Württemberg.

July 2011: presentation of art reproductions on the occasion of a public ceremony of the 10th Armored Division of the Bundeswehr.

December 2011: Two paintings go on as historical documentation in the possession of the Regional Museum of Lauenburg.

October 2010: The oil painting "submarine U995 as an underwater view" is acquired by the Naval Museum Hamburg, Prof. Peter Tamm, over.

June 2010: Presentation of selected works and regional individual pieces in the gallery Andersartigmehrundmeer in Wismar.

June 2009: Biggest German joint exhibition of marine painters during the Kieler Woche and under the auspices of the German Navy. Opening by the Deputy. Fleet commander Kpt.zS Arne and the Kiel Lord Mayor.

Spring 2008: The Marie Calendar "The German Navy - From 1956 to today - Marine painter Luke Wirp" comes on the market.

A whole year of hard work on this project to fulfillment.

About 700 copies of this large-format glossy calendar sold until February 2009.

June 2007: exhibition of selected paintings in the gallery Mewes,

April 2007: Invitation to the exhibition at the National Association of the German Navy Federal days

January 2007: Due to numerous works for the German Federal Navy, Award by the inclusion in the German Navy League.

November 2006: exhibition of selected paintings on the art and antiques fair castle Wotersen

August 2003: Opening of its own art gallery Lukas Wirp in Ratzeburg, Lauenburg.

May 2001 opening of his own art gallery Lukas Wirp in the old town of Mölln. The gallery is spread over three floors and is equipped with his own works.

February 2001 dedication of a painting of the Madonna painting "Mater Dolorosa" in the late Baroque Church of St. George on the mountains.

September / October 2000: Solo exhibition at the Council Chamber of City Hall to Ratzeburg.

October 1999 Joint exhibition in the agency of Fine Arts with the theme "Art and Spirituality".

June 1999: presentation of a legal Monet-counterfeiting and audience appeal creation of another Monet forgery on the "Home and Garden" in Hamburg.

March 1999: Images blessing of Raphael reconstruction "Madonna del Granduca" in the sacristy of the monastery of Bethlehem Mother Theresa sisters.

January 1999: Group exhibition of French artists in the Gallery Live and art.

October 1998: Solo exhibition as a final event of the Rahlstedter Culture weeks in the premises of the People's Bank east-west.

April 1998 that awarded the Martin Luther price of the evangelical broadcasting service at the pictures Blessing of the "Holy St. Anne".

March 1998: Images blessing of the painting "Holy St. Anne" as an accurate reconstruction of Lucas Cranach the Elder in the church of the Catholic. St. William Church.

November 1996: Images blessing of the painting "Sistine Madonna in cut-copy" in the monastery church of the Sacred Heart Sisters in Wilhelmstift.

July 1995: Solo exhibition "People and Sport" on the occasion of an anniversary event in the sports and Golf Club, Poppenbüttel.